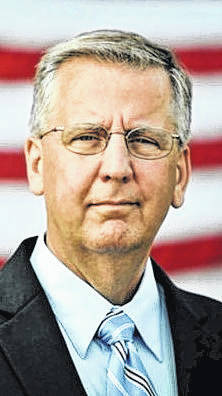 The unnecessary death of George Floyd should be a catalyst for our society to take another step forward in the pursuit of justice for all.

When stark realities showcase a disconnect between our constitutional ideals and the lives of everyday Americans, we have a window of opportunity to improve, but that requires constructive action, not senseless violence.

By tolerating domestic terrorism, instead of addressing it head-on with sufficient force to prevent the senseless pillaging of American businesses, we are making it harder to achieve our American ideals.

Peaceful protests are a hallmark of change in our land, and I am thankful for those who care enough about justice in our communities to step forward and demand change.

I have watched the rioting across American cities with sadness and outrage because rioters are not helping our country heal.

They are not honoring the life of George Floyd. With every swing of the baseball bat they are attacking one family’s American Dream, with tragic ripple effects upon countless other lives.

By tolerating domestic terrorism, instead of addressing it head-on with sufficient force to prevent the senseless pillaging of American businesses, we are making it harder to achieve our American ideals.

Consider the poignant example of a small grab-and-go restaurant in Raleigh.

Carroll’s Kitchen was started in 2016 to help women recover from tough life situations like homelessness, incarceration, addiction, and domestic violence. They named their business after the Carroll family who devoted their lives to help struggling families during the Spanish flu a century ago. And they have made good progress.

Since opening, Carroll’s Kitchen has helped 26 women (and counting), all of which have maintained full-time employment since graduating from their restorative program. None have returned to prison and 80% have stable housing now. Even though the restaurant has never had seating, their business in downtown Raleigh has been hit hard by the forced shutdowns of COVID-19, which have decimated small businesses across the state.

Yet this weekend Carroll’s Kitchen was hit hard by a preventable crisis, as almost every downtown Raleigh establishment was looted and vandalized for two nights over the weekend. According to a reporter for the News and Observer, they may not reopen.

Brian Brenberg, who is the executive vice president and chairman of the Program in Business and Finance at The King’s College in New York City, says if the rioting and looting doesn’t stop, then volunteers’ efforts to clean their cities won’t matter.

We cannot allow lawless mobs to sabotage this moment of opportunity.

Responding to the 2015 riots in Baltimore, President Obama rightly distinguished the lawless mobs from the peaceful protesters when he said, “[T]here’s no excuse for the kind of violence that we saw yesterday. It is counterproductive. When individuals get crowbars and start prying open doors to loot, they’re not protesting, they’re not making a statement — they’re stealing.

When they burn down a building, they’re committing arson. And they’re destroying and undermining businesses and opportunities in their own communities that rob jobs and opportunity from people in that area…That is not a protest. That is not a statement. It’s people — a handful of people taking advantage of a situation for their own purposes, and they need to be treated as criminals.”

Especially as our country struggles to recover from a worldwide pandemic, the criminals looting businesses and rioting here must be prosecuted and stopped. Small businesses are facing enough challenges right now.

They rely on their government to keep them safe. Unfortunately, some elected leaders like our own Gov. Roy Cooper are not responding with enough strength.

On the morning after Carroll’s Kitchen was ransacked, he downplayed the losses for countless law-abiding citizens by saying, “We cannot focus so much on the property damage that we forget why people are in the streets.”

We must do better than that unhelpful dichotomy, which undervalues the lives of hardworking citizens pursuing the American Dream. As we struggle together to recover from COVID-19, and struggle to achieve the justice for, all which every American deserves, we must ensure public safety. It’s foundational.

Our economy cannot grow back to its historic strength if everyday Americans, like the good folks running Carrol’s Kitchen, cannot rely on their state and local governments to protect them from violent mobs.